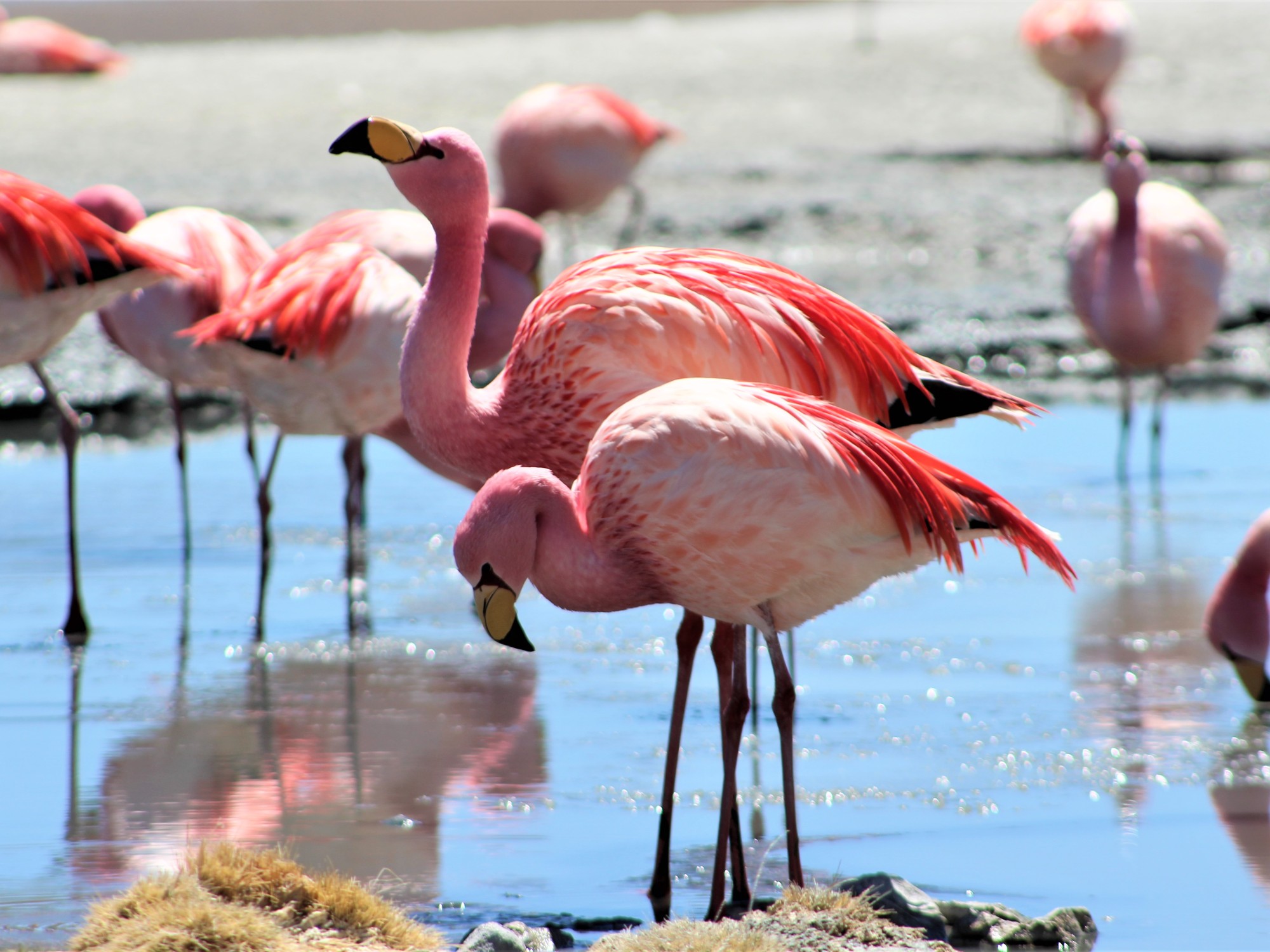 The first glimpse I caught of the Andes was from the plane incoming from Easter Island. We soared through the sky over Santiago de Chile, preparing for landing. It was late in the day and the sun was setting, highlighting the surrounding relief with contrasts of blue and crimson. The hundreds of jagged summits pierced through the clouds clinging to the base of the mountains, resembling an impenetrable forest of rock and ice.

I think I have a thing for mountains. They impose respect. They’re beautiful and terrifying at the same time. Like scars on the surface of the Earth, mountains are the unmistakable evidence of the forces at work below ground.

I couldn’t help but feel a little uneasy at the idea of traversing such an inhospitable terrain.

The mountains weren’t exactly where we were heading: our next destination was the Atacama Desert. Not in any way more welcoming than the mountains I had seen from the plane, the Atacama Desert, sitting at an altitude of up to 4600m above sea level, it is THE most arid place on Earth after Antarctica with only 15mm of rain on average each year. The air is so dry, that one can clearly see mountains more than 400km away. The high altitude and dry air, combined with the very low population density – meaning there’s next to no light pollution – are the perfect ingredients for clear skies, making this particular place a favorite for astronomers. Indeed, many of the world’s largest observatories are located here.

Exceptionally, there are years during which the Atacama Desert sees more rain than usual. Seeds that have lain dormant in the soil for years suddenly bloom, transforming the barren landscape into a sea of tiny flowers. This happens once every 5 to 7 years and, luckily for us, 2017 was one of those years. As soon as we found out about the phenomenon, we started to ask around in order to find out how and where we could see them. What we unfortunately didn’t realize at the time is that (A) the Atacama Desert covers more than 100,000 square km and that (B) we had come something like 800km too far North. Just Google Desierto Florido (Flowering Desert) and you’ll see right away why we didn’t think twice before booking a night bus to travel 800km to the charming *sarcasm* town of Copiapo and back. Once there, we rented an old pick-up truck – this is after sitting on the sidewalk outside the rental place for 2h30 hours because our bus had us arriving at 6AM – and were on our way. There was no consensus about where we actually need to go to see the Desierto Florido – we probably should have planned this bit a little better – so we drove hundreds of kilometers that day without seeing anything more than desert and rock. We were just about to give up, when we FINALLY found this: 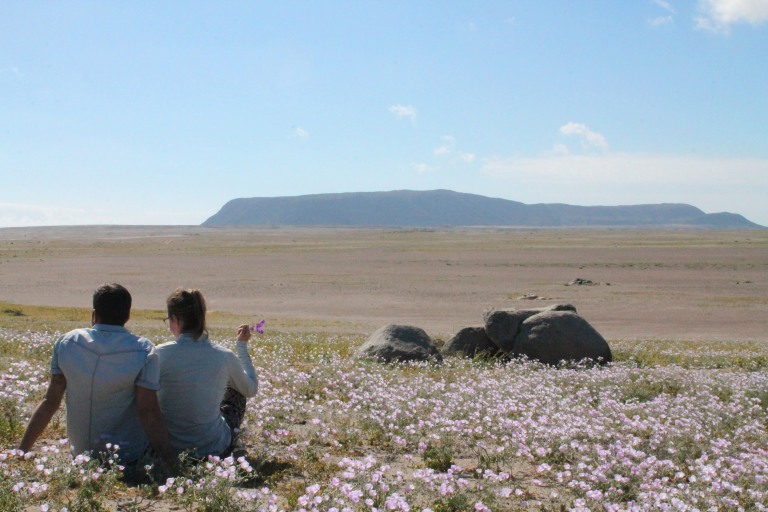 Granted, the Desierto Florido we found wasn’t anywhere close to as stunning as the photos we’d seen, but it was definitely something! Especially when you consider what the desert usually looks like (i.e. a giant expanse of rubble).

Back in San Pedro de Atacama, a little oasis in the desert dominated by the neighbouring Licancabur volcano, a perfect cone elevating up to nearly 6,000m in altitude, we set out to explore the Valle de la Luna or Moon Valley. Our day trip was like a voyage to another planet: being completely devoid of life, this ochre landscape shaped by thousands of years of erosion resembles the surface of the Moon (thus the name). It’s no wonder the NASA chose this place to test the Mars Rover before sending it to outer space! 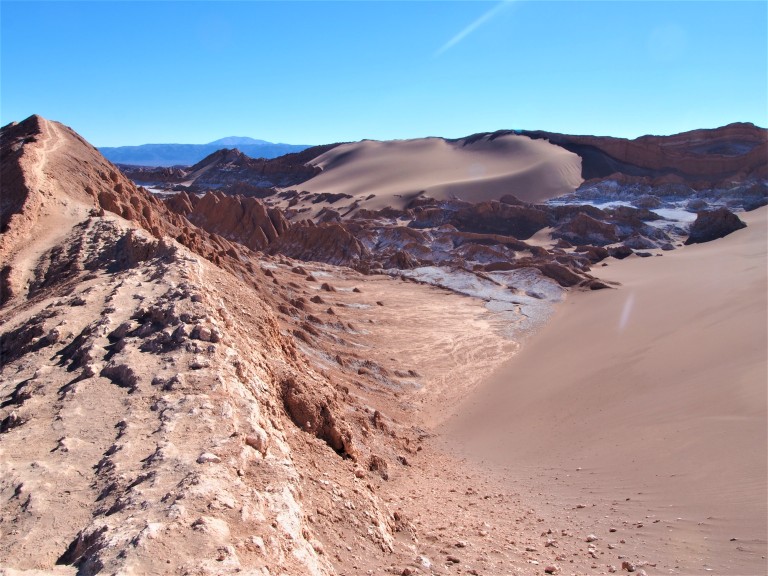 The stretches of white below is actually salt!

Our next adventure took us through the unique Altiplanos of Northern Chile. At an altitude varying between 2,500 and 4,000m above sea level, the Altiplanos or elevated plains is the highest inhabited region in the world after Tibet. Not much grows or lives around here but, extraordinarily, flamingoes – of all birds – found their way to this harsh ecosystem and decided to make it their home. They spend their days waddling around vividly colored lagunas in search for the tiny shrimp that give their feathers their pretty pink color. 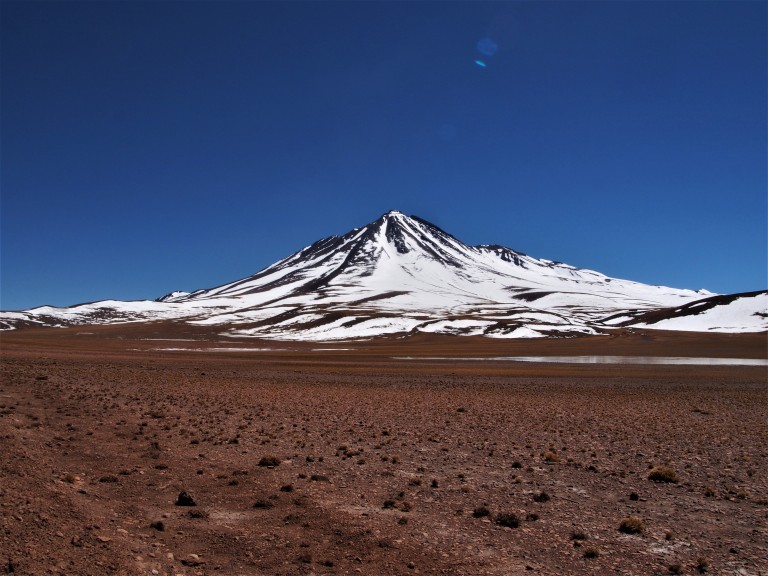 The Altiplanos showcased an extraordinary landscape, but little did we know that we were about to embark on a journey through some of the most stunning and surreal places we had ever seen. San Pedro de Atacama is indeed the starting point of a road trip across the Chilean border and into Bolivia, where we drove through sand and salt, wide-eyed at the surprising beauty around us.

But more about that another day!

2 thoughts on “Discovering the Atacama Desert”